Essential Hostel
Architects: Partizan Architecture, Team: Gergely Hory, Zoltán Major, Péter Müllner, Location: Budapest, Photo: Danyi Balázs, Project year: 2015​​​​​​​                        PRTZN
Program: Hostel with enhanced design
Partizan Architecture was commisioned to tranform the whole first floor of a historic apartment building into a hostel equipped with dormitories and private rooms with separate bathrooms, community area and a kitchen.The commissioner asked our team to make a hostel that becomes competitive on the market by improved quality through design, while remaining a budget oriented accommodation.
Challenge: How to transform four individual units into one coherent system?
The area designated for the hostel consisted of four separate real estates appropriated to host various functions: two offices, a hairdresser salon and a residence. The main challenge in the reorganization of space was to find a way of how to bond the existing interior heterogenity to host a new homogen function. The conventional approach would have been to remove everything instead of the loadbearing sructure. However, the circumstance that the available budget was very low necessitated to seek alternative ’lighter’ solutions. How to transform a spce significantly with interviening the less possible?
Project: Adapting to existing heterogenity to form new use
By removing the separation walls of the previously individual real-estates, the heterogeneity of the former layers of usage became visible. As a consequence different floorings, materials and other installations that used to serve the individual functions merged into one longitudinal continuous community space: it is like an X-ray through the building. Due to the very tight budget on one hand and experimentation on the other we aimed to turn this heterogeneity into an advantage and tried to keep and adapt to the existing environment to the possibly highest extent. Since newly built elements were also needed to be installed , we developed a strategy for their integration to the given diversity: the intervention for the hostel function intends to behave as a new but temporary and distinctive layer on the existing structure. We marked this distinction by applying the newly built plasterboard walls partly unpainted. The new lighting system follows this principle as well: the electric cables are not hidden in the walls but visible as an added layer.
We wanted to extend this concept to the installation of furniture: instead of built-in interior elements, mobile, prefabricated and independent units are installed.
By the design of the custom-made beds in the dormitories the main aim was to increase comfort by fostering privacy of the individual user. In addition to private lockers, plugs and lamps curtains were also introduced for the beds 50cm farther from the side of the mattress so that an extended area in front of the bed can be used as private territory for changing clothes for instance. With such small interventions we intended to expand the usability of the only private living unit of the urban traveller.​​​​​​​ 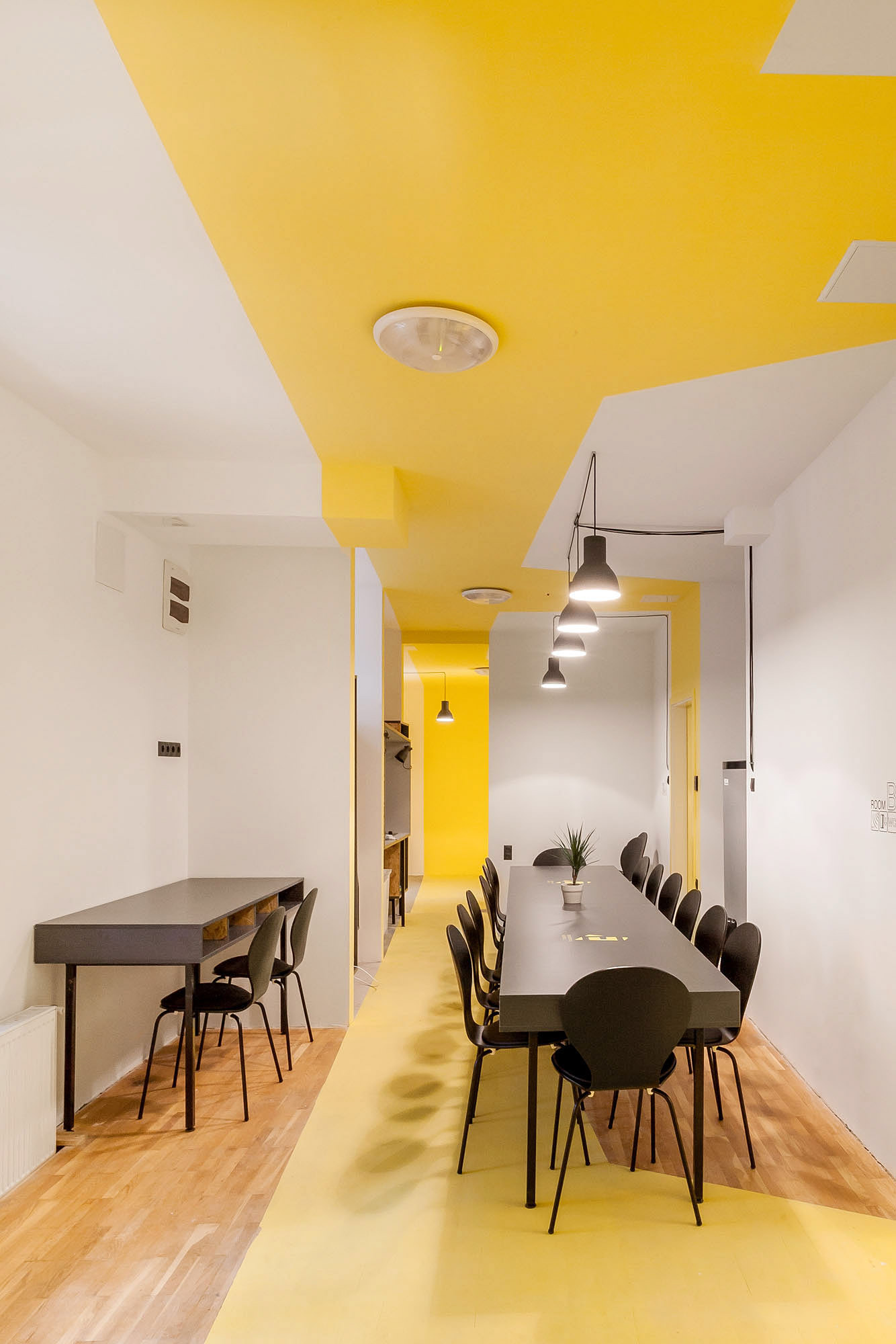 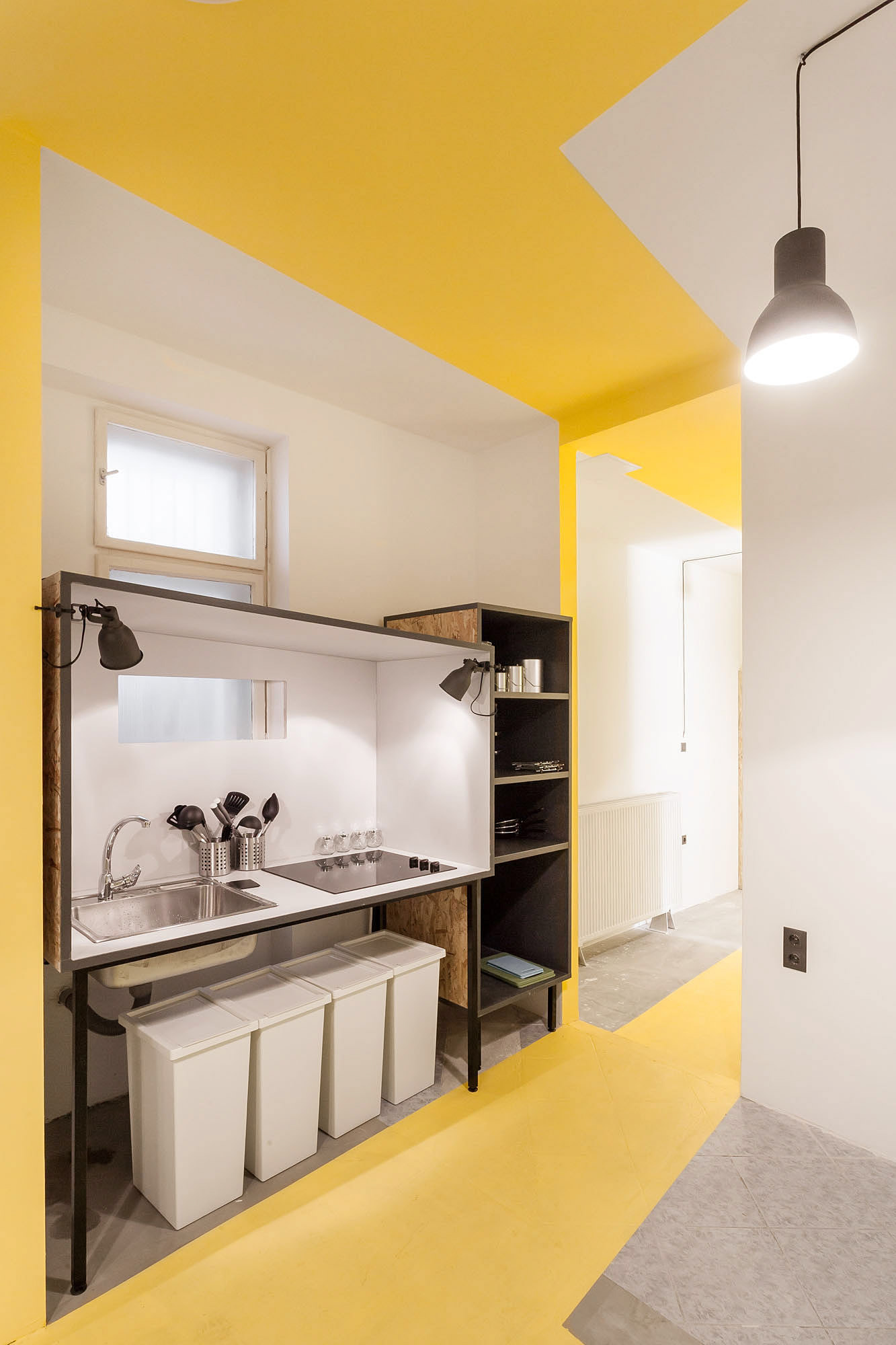 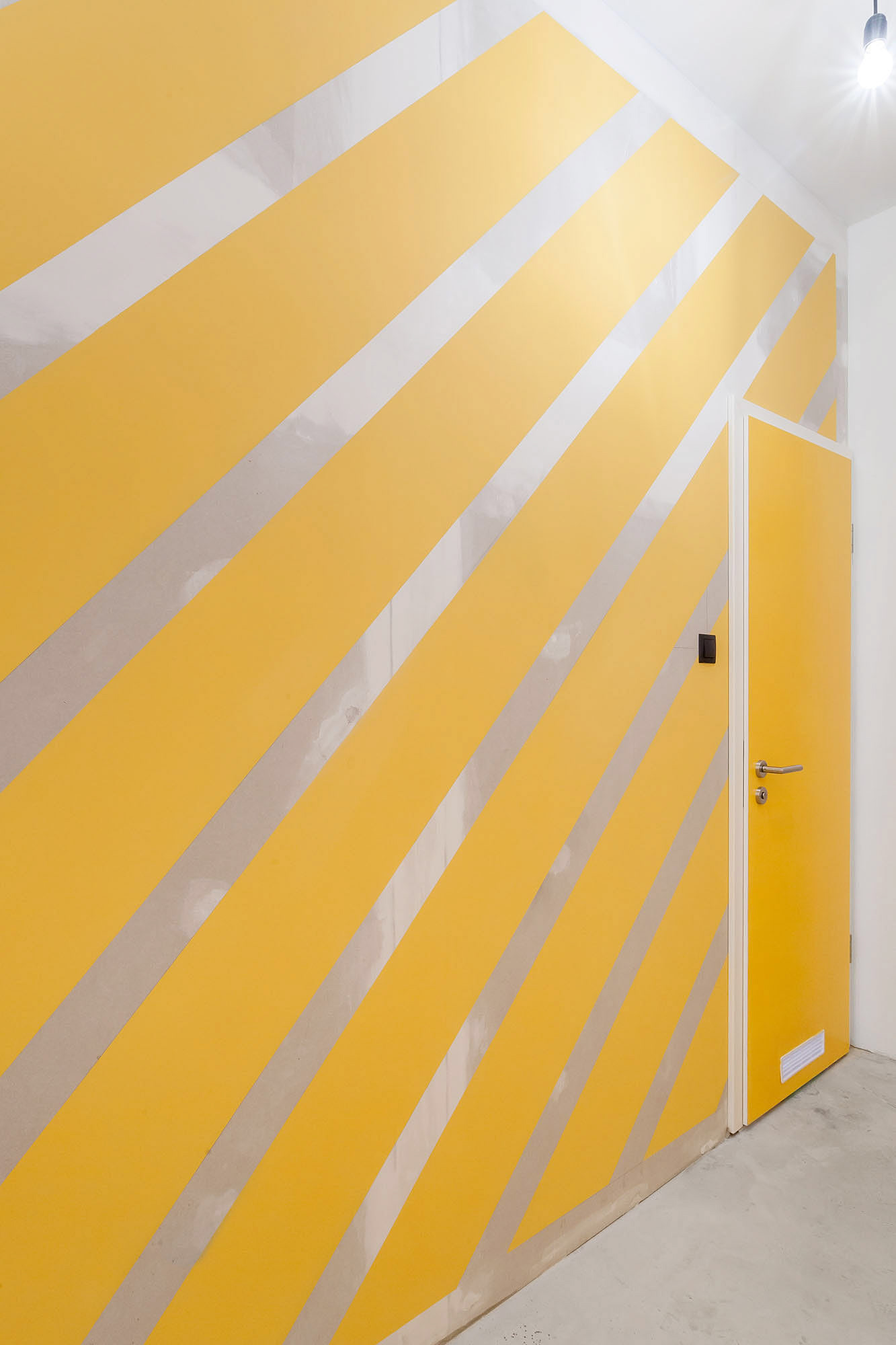 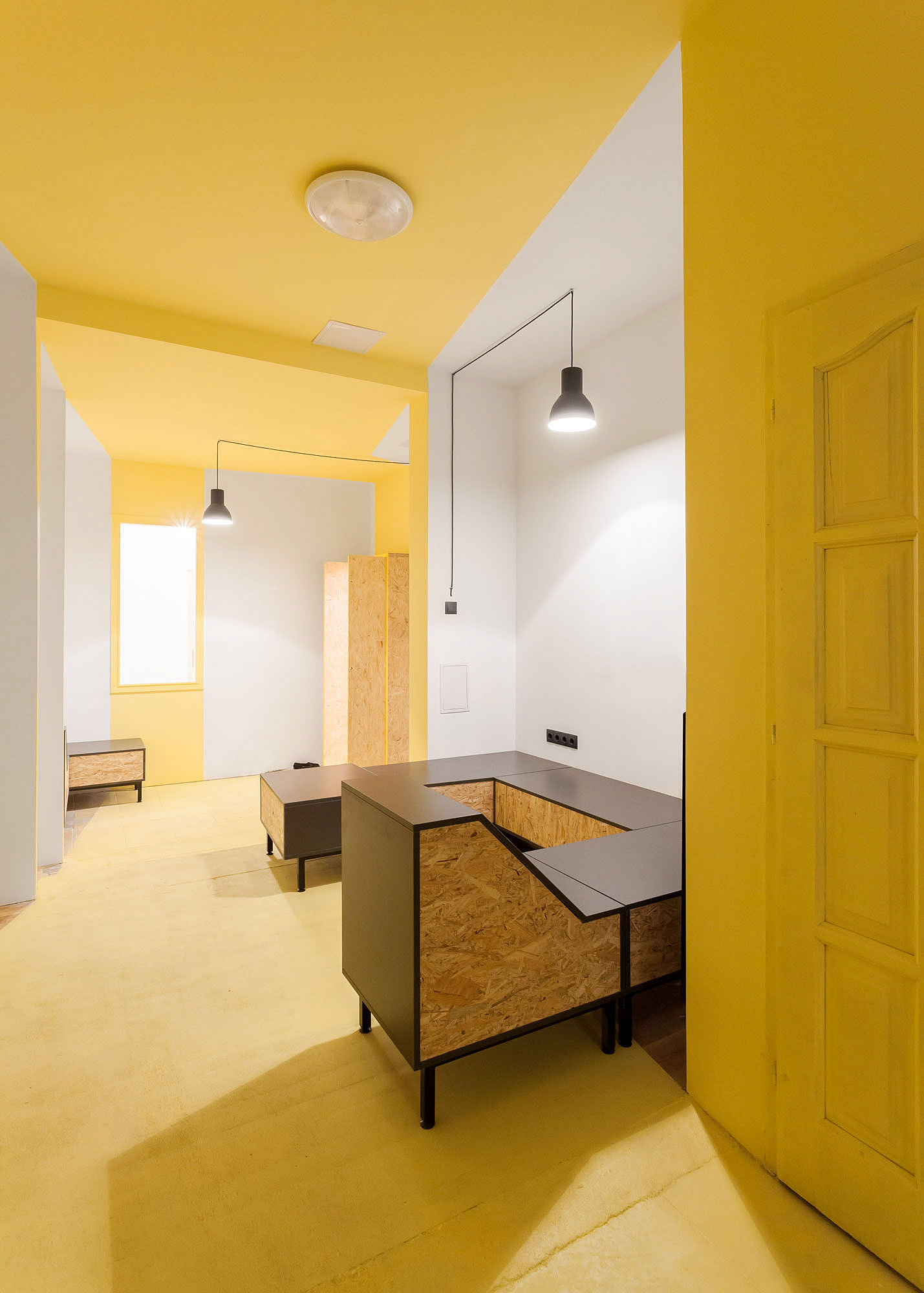 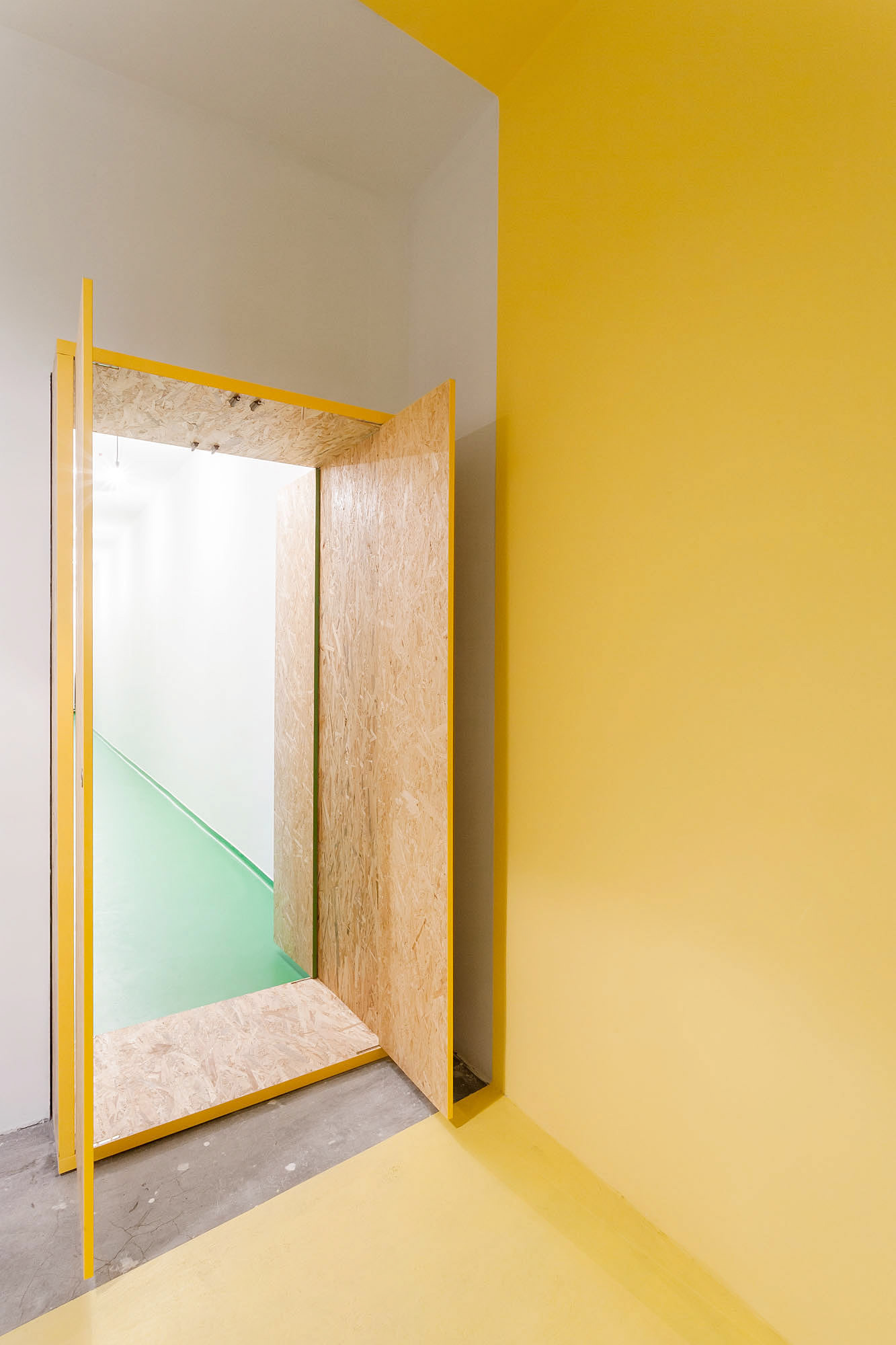 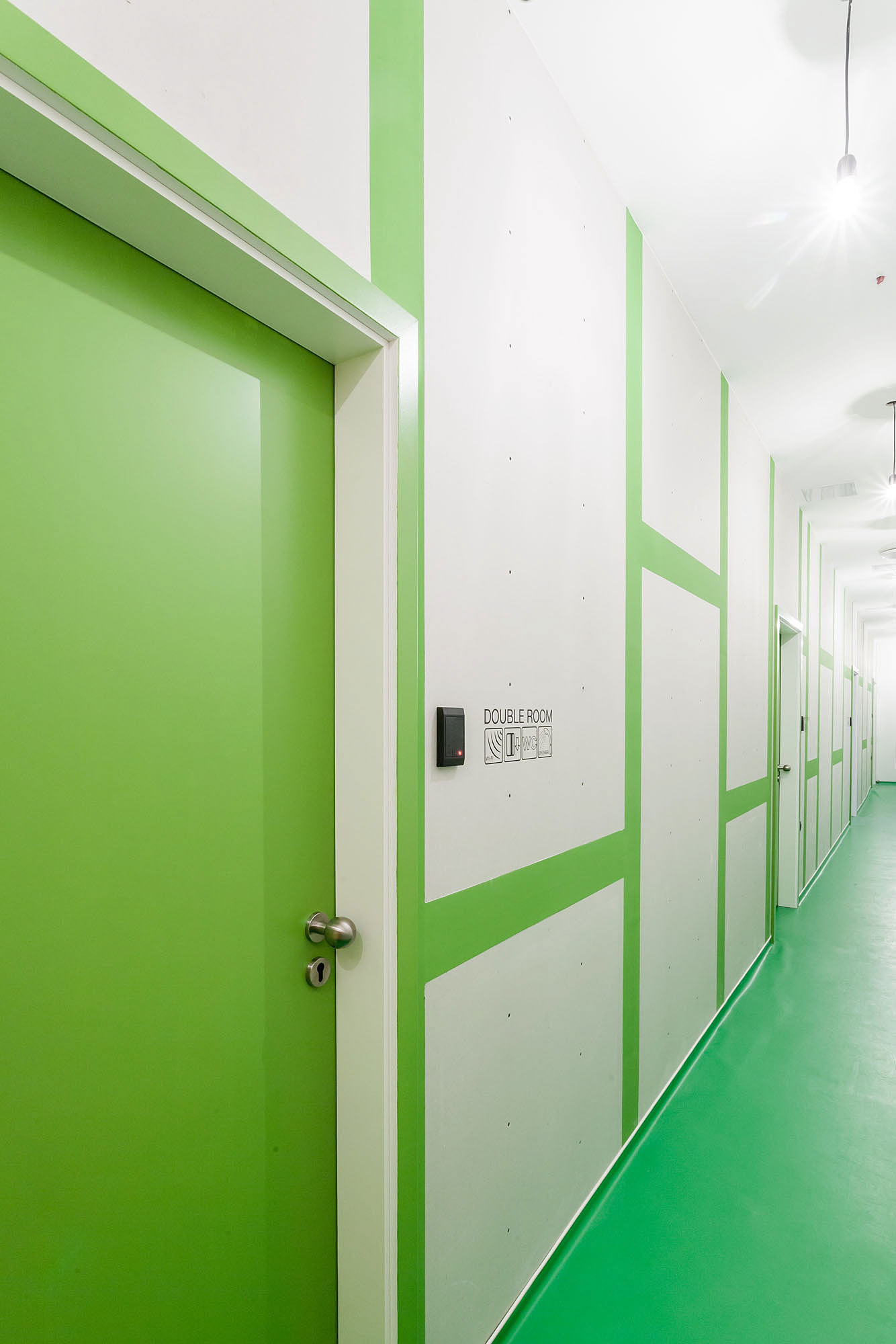